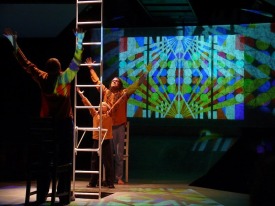 The Hole in the universe

The Shape of the Room—

when eyes are closed.

As with visual art, Adi Da Samraj also developed the artistic media of literature and theatre to communicate the nature of Reality Itself, and to illustrate the patterns and archetypes that tend to define people’s conscious participation in Reality Itself.

In the late 1990s, poet Robert Lax said of The Mummery Book (the opening volume of The Orpheum trilogy), “Living and working as a writer for many decades, I have not encountered a book like this, that mysteriously and unselfconsciously conveys so much of the Unspeakable Reality.”

The Orpheum is also presented in theatrical form. The primary theatre is located in Middletown, California, a two-and-a–half hour drive north from San Francisco.

For more about Adi Da’s literary trilogy, including current enactments of The Mummery Book, visit: